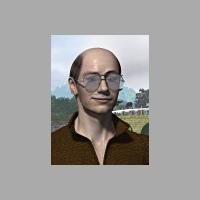 Hi, my name is John Martzahn, alias BeyondVR.  I live in Davenport, Iowa, the largest community of an area known as the Quad Cities, straddling the Mississippi River.  I have been married to the same woman forever (since 1969; do the math).  I spotted Bryce 3D in late 1997, and got my first computer.  A few weeks later I bought Poser 2.  I was very happy creating 3D art, and I never planned to do any modeling, but...
I learned how to model using Anim8or, and still use it the most.  Anim8or is robust, and handles the large files I create easily.  It lacks many advanced tools, and I use Hexagon 2 and Shade 8 to supplement it.  I also have Carrara, and someday I'll open it ;)  For my Renderosity store I have created kitchen items and automotive tool sets, but my principal love is doing WW2 ships.  My WW2 Destroyer, the Bryce version of which I sold to DAZ3D, has become the most popular WW2 warship on the Web.  In the fall of 2007 I added the WW2 Battleship and the Liberty Ship.  I create many free addons for my models, and they are available at http://hometown.aol.com/helmzahn/addon1.html.
I plan to start on the Japanese WW2 aircraft carrier Akagi in December of 2007.  I also have a light cruiser planned, and a PT-Boat.  What comes next is anyone's guess.  Thanks for stopping by!

The 1st Marine Division landed on Guadalcanal, the morning of August 7, 1942. Acting immediately, Vice Admiral Mikawa, commander of the 8th Fleet at Rabaul, assembled a scratch force of 4 heavy cruisers, 2 light cruisers and one destroyer to destroy the transports. The view here is from Florida Is., looking south toward Guadalcanal. The unloading area was to the east (left), out of the picture.

Not knowing that air search had been inadequate, Adm. Turner did not rate the possibility of a surface attack highly, but a mixed screening force was put in place. The most likely approach of a Japanese attack force was either north or south of the volcanic cone of Savo Island, so the Allies had two destroyer radar pickets guarding the entrances to these passages, and two screening forces to the east. The screening forces were three heavy cruisers and two destroyers each, except that Adm. Crutchley, RN, had taken HMAS Australia from the southern group to a meeting on Adm. Turner's flagship. Afterward, he had decided not to return for fear of night maneuvering. Only the Japanese would have a flag officer present at the Battle of Savo Island, the night of August 8-9, 1942, where the US Navy suffered the worst defeat in its history.

Mikawa's force was able to sneak through the passage when the pickets were sailing away from each other, and surprise the southern group. USS Chicago was torpedoed and HMAS Canberra was decimated. Rain squalls trailing southeast from Savo blocked the view for the northern force, and USS Chicago issued no contact report. Sounds of Japanese torpedoes exploding at the ends of their runs were mistaken, by the northern task group, for anti-submarine action taken by the southern group. Furthermore, no one in the northern group knew that Adm. Crutchley was not in command, and the captain of USS Vincennes was expected to fight his own ship and also command the task group. Mikawa's force had inadvertently split in two, eventually catching the northern force in a cross-fire.

Pictured here is USS Astoria, trailing her sisterships USS Vincennes and USS Quincy. The northern force was patrolling a box at 10 knots, at reduced readiness, when three of the Japanese cruisers snapped on their searchlights. It was all but over at this point. Four Allied heavy cruisers became the first residents of what would become known as Ironbottom Sound. Admiral Mikawa's scattered group needed to be reformed, and he decided not to attack the transports, fearing carrier air attack. The naval fighting around Guadalcanal would become the bloodiest the world has known. Poser 6/Bryce 6.

Beautiful image of a dark night with no moon !