At first, thank you for the nice comments and favorits to my last image: "Heaven, A.. and Hell - Molly's healing"
It means a lot to me! Thank you!

Yes, now the lout Vampire Ragnor sitting in a jam. Of course, he is not touched in hell with kid gloves. But he is hard-nosed enough to offer his opponents stand up. He bullies his tormentors where it is possible. If he is whipped again, he complains that the torturer as a girl strikes.
However, Satan discovered Ragnors Procedure quite quickly and now two supervisors are present, they Ragnor once again plays off against each other. The one he praises while criticizing the other until great profusion.
But in his quiet hours he prays to his god Odin and says again and again his own name. So he does not forget who he is. For all the devil can rob him, just not his will ...
After what felt like an eternity of torture and isolation, he is currently suspended again over his head and is flogged when a door opens and Satan announces his visit.
The vampire asks who wants to visit here at this dreary place. Only angels can bring in someone from hell. He immediately thinks of Barbiel. A little later he thinks he would be dead ..
Because none other than the Grim Reaper stands before him and proclaimed, that Ragnor was dismissed and he should accompany him.
Ragnor checks whether he still has his head, or perhaps died. But bone man strapped him to a strange utensils that looks like a parachute. Grim Reaper is demonstrated in the well and already they shoot up ... And it goes on and on ...

This is a sensational addition to the well told story.

One can guess is in Hell with that red lighting and atmosphere ! Well done all together and the story is still very delirious :-)

Lamentations to destroy the power of Satan . Love this scene .Great art again ((5++))

This cage is very impressive, indeed Ragnor is very strong, the lighting is superb, excellent image, as always, Elke ! 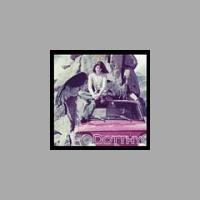 A fantastic and very moody image!