We pick up where Batman left Robin and Hespira.

As the trio continued up the corridor Alfred came on line again. “Sir, good news, J'onzz has arrived.”

“Excellent, can you patch him through?”

“I'm here Bruce. What do you need?” Replied the deep voice of Jonn J'onzz

Bruce gave instructions. “I need you to be me and when Robin and another passenger get to the roof I need you to get them to the cave. Bruce Wayne needs to make an appearance at his facility and whenever Bruce can be seen when Batman's around, it helps.”

“Yes. And keep your eyes out, I have a feeling you might meet some resistance. Wayne security should be there any minute to assist.”

Batman turned to Robin and Hespira. “You two get out of here. I have to go back and J'onzz has made this possible. Robin you're too injured to help with this and I need you to help J'onzz keep Hespira safe.”

“I can take care of myself.” She said defiantly.

Batman and Robin looked her up and down once.

“Okay, so I look a little off.” She defended.

“You can't be seen in public, Batman said.”

“No argument here either.” Jason was looking a little pale and he couldn't move his arm without it causing great pain. “By the way, all that blood, are you in pain or hurt?” He asked Hespira.

“No. It's just Dr. Cyber's failed skin replacement. It disintegrates and bleeds all over the place making a mess.”

“Enough. Get going and I'll meet up with you as soon as I can.” And Bruce retreated back down the corridors. He essentially followed Robin's original path through Level 1 and entered the mysterious computer room that he had never authorized to build. He would never be this lax again in his attention to his company. In the computer room he heard someone mumbling. He kept to the shadows and soon spied Cyber's assistant Julia at a terminal. He approached her without a sound.

When he confronted Julia, she fainted. He used some smelling salts to revive her then demanded a full accounting of events. “You don't have to go to jail forever, if you help me now.”

Julia realized she had little choice. No matter what, she was caught now. “Very well. Your Diana is still in her own body. Dr. Cyber, Scorn, wanted everyone to believe Wonder woman was dead, so there would be no complications.”

“That's what she's calling herself now.”

“Scorn needs Diana's life force intact in its own body to access Wonder Woman's godly powers. The tiara suppresses Diana's influence and slowly allows the former doctor to assimilate these powers until there is essentially nothing left of what is Diana. She uses the tiara to activate the powers, but the more she does the more the real Diana comes to the surface. Should that happen now, Diana could conceivably retake her body and suppress the doctor. I believe she was afraid if that were to be discovered it could be used against her. So, she needed it to look like Diana was gone, once and for all.”

“If that happens she could expel Cyber from her mind.”

“No. They are one now. Even if Wonder Woman wins out, the doctor will still be inside fighting with her. If Scorn's mind is forced out, they could both die. Unless....”

“Well...there is another positronic brain I am supposed to finish. If Diana was in control and we got her back here, we could map Cyber onto that brain, permanently removing her from Wonder Woman.”

“How long do we have until Scorn dominates Diana's mind?”

“I don't know. Normally hours, but Diana is different. She's the first demi-god we've ever worked on.” Julia half smiled at the lame joke she just made. “It could be days or weeks, but I doubt it could take longer than a month.”

“Where is she now?” Batman asked. “The original plan was that Dr. Bryce was going on a scheduled sabbatical starting tomorrow. You were supposed to be gone with the Joker and Bruce Wayne and anyone else here at the facility would not even know what happened. But now that's all changed and Wayne's security is coming. I'm supposed to meet her at a hideout not far from here, after I start a transfer of the data here in this room to a remote facility. The truth is, the brain is already mapped with the necessary data. I finished it two days ago, but did not tell her.” “Why not?” “Well if I finish too quickly, then she finds ten more things for me to do.” She shrugged and continued. “Then I'm supposed to set the timer to flood this room. Scorn has already left. She said she would transfer the brain herself.” Batman stood there brooding while Julia fidgeted nervously. “Okay Julia. I want to trust you, but I sense your vanity and loyalty to your employer may cloud your judgment.” “Batman please.” She began to cry again. “I'll do anything to help if you keep her away and keep me from jail.” He looked at her and his form fitting cowl mirrored the squint of skepticism in his eyes as he searched for truth in Julia's eyes. “I can guarantee you safety from Scorn if you help, but you will have to pay for the crimes you've committed. However, that does not have to mean jail. Perhaps a monitored position in Wayne tech might be a start. An assistant level duty of course.” Her frown turned to a smile of hope. “Really!? You think Bruce Wayne would still hire me?” “He owes me a few favors. I'll see to it.” “I'll do whatever you ask!” She beamed. Just then a loud “POP” came from a different part of the large room and suddenly the sound of rushing water could be heard. “Oh my God! She must have blown the valve! We have to get out of here.” Julia ran to the spiral steps that led into the room from above with Batman following. When she got to the hatch, it was closed and locked. “No! She's trapped me! Batman looked around and saw the open hatch that Robin had gone through near the wiring conduit. He took a moment to reassess Julia. His observations told him she was very non athletic. The broken shoe heel and her walking motions told him she did not have the best balance and her physique loudly said she did little to exercise. It would be faster and safer for him to get up top and get the hatch open from the other side Now the water had now covered the floor and was rising quickly. Sparks started to fly as some of the electronics started to become compromised. He had to act quickly. “Trust me.” He said to Julia. “I have to get back to the upper room and I'll get the hatch open.” “No! Take me with you!” “You wont make it.” And Batman pulled out his grappling gun and fired at the ceiling aiming at the other hatch. He left the panicking woman and made his way through the opening. He saw the suspended room as Jason had seen it and got to the “roof”. He now saw the vent tubing moved and smashed open the grating to the room. Once inside he went to the hatch to the room below. It was just a basic lock, which he opened and saw a wide eyed and now grateful Julia. He helped her up and closed the hatch. The water had risen a quarter of the way already. “I thought she needed the data?” Batman asked “I don't understand either. As far as she knows, I haven't finished mapping the newest brain.” Julia moaned. Then they heard a quiet beeping. Julia looked around and saw the brain box. It had a red light that blinked in time with the beep. “Oh God! She didn't take the brain. She set it to self destruct! We have to go!” And she began to run, but Batman reached out and grabbed her. “I need that to save my friend. We need to stop the self destruct.” Once again Julia began to panic. “Julia, calm down. You know this equipment right?” She nodded, tears streaming down her face. “Then let's look and turn this off.” Batman put a hand on her shoulder to calm her and she nodded again. Continued...

wow, this is intence. nice work..

Wow what an amazing story and image my friend, fabulous work.

Excellent image,really like the drama created by your lighting!

Things are getting intense, now! Really gripping story, great writing, and great artwork! Outstanding stuff, Art! On to the next page....

You know, this whole image tells the story but that lighting is just phenomenal. I am really blown away. Gorgeous work!! :) 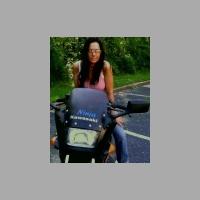 The batman, how cool!