That winter was very cold, but once in his life, Opna was at peace with the world: watching his fields covered by a white blanket of snow, he thought: "If it doesn't rain too much or the Gods don't send a drought, we'll have a good harvest." He allowed himself a smile while his eyes roamed over Peqo's clay pots counting them possessively and the new cloth for the Sacred Bundle that Chaisos had just finished.
"In the Spring Festival I will present the new cloth for the Sacred Bundle, so I'll give only one party instead of two," he thought smug for his cunning, and told his daughter to hide the cloth.
Looking at his daughter, Opna felt almost happy. The girl was beautiful, very beautiful with big breasts and hips like wagon wheels, perfect teeth and shiny lips, her hair was the color of the mature ears of wheat and her eyes were blue like the August sky. Chaisos, his daughter, was beautiful and very skilled in home-work, not skilled as her mother in ceramics, but her fabrics were gorgeous and she was a good cook, which is always a good thing. "Many chiefs will be willing to pay a high bride's price for her!" Opna thought, pleased at the thought of the gifts he would receive, the number of goats and cows he could ask.
Like every night when it was time to sleep, Opna remembered Peqo her duties as mother. "The girl's place must be secluded and her legs should be tightly tied from her feet to the hips. And don't forget to tie the rope to your wrist, Peqo. The girl is intact and she had to stay until the wedding this way."
So Peqo made sure Chaisos stayed a virgin by keeping her in the house until her wedding. She tied her at night so the girl couldn't open her legs to any young warrior who might sneak in and chaperoned her strictly when she had to go out.
When the time came, the emmer began to ripen, its heavy ears bending to the ground.
"What a beautiful view!" Opna said loud looking at his fields. He wanted to bite a grain of the new ears to test its hardness and decide if it was harvest time. But as he observed the golden ears closely... Oh Gods, they weren't so golden, they were pinkish! Opna bent to pick one ear and was thunderstruck: each ear showed small phallus-shaped grains! Opna groaned, grabbed one ear and another: all were made of turgid little phalluses. A field of cocks!

Marvelously done with a great character and fine lighting.Great expression,too.

Great work on image and story!

love his expression and the story

What a great subject! Lovely work!

what an expression and a superb portrait. glad you were able to post 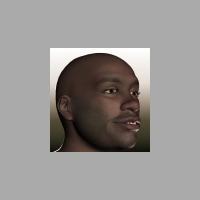 That definitely would be a shock.

What a nice surprise