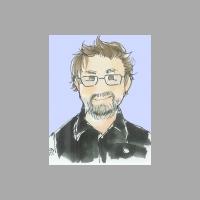 Staff member since 2008, Moderator for Poser, DAZ Studio and the German Forum.

Hi. My name is Uwe Schmidt and I live in Hannover, Germany. I was born 1965. Since  I got twelve I work with computers, it was a hobby and is my job now. I still know how it started here, with Sinclair, Commodore, Apple and Tandy - ages ago. Now we have the Internet and true color graphics - it's unbelievable to see how fast all evolved.

I started Poser in the good old days, when a new Figure named Victoria was about to be released from Zygote and Poser 4 was new Software. I planned to use Poser for a web comic then - well I still plan that, even if many years have passed, I have learned a lot but still not found the time.

I started modeling some years ago, the picture above and in my avatar was the first scene I did completely on my own. It's done in Cinema 6 CE+, everything modeled and textured by myself, it was made to fit the "minimalism" theme of a 2005 round in the now defunct IRTC.ORG. Although it is far from perfect, I still like it very much.

At the moment (early 2008) I still dabble in modeling, although making progress slowly. I use Silo and Cinema for modeling, Poser for content and posing, FireFly, Vue and POVRay for  rendering.  I still have a lot of unfinished projects here, but I surely am not alone with that.

As you can probably guess from above picture I like to play Go, the asian board game. I started to play it regulary in our local club and try to improve here too. I play as an european 5 kyu at the moment. The board situation on the board above is not one I played - it's taken from one of the rare cases when professional Go players use the 9*9-Board. (usually it's 19*19, for those who don't know the game)

Thank you for having a look here.

Camera and Pose files for