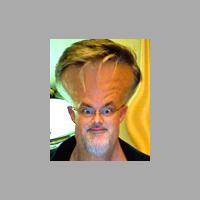 Thanks for dropping by.

I've been asked several times where do I get my ideas for the pictures I create:
There's two answers:
1. The Short Answer:
A Book I wrote. If that's answer enough, great. If not, read below.
2. The Long Answer:

The pictures I have created and show here are all either directly taken from, or related to the Book I have been working on for the better part of sixteen years. It has seen 4 iterations, and completely rewritten twice. Although the various sub-plots have come and gone, and the characters names have changed once or twice, it's still true to the original story line.
Want more?
Ok then, set up your chair, get a cup of coffee, soda, whatever, and try to wade through this:
I had been an avid Role Playing geek from the onset, playing AD&D in high school in the very early 80's. After high school, I joined the Navy and luckily found a good role playing friend,  P. Marshall. Who had a rather different take on the game and did not stick strictly to the rules as I had done before. After our duties took us else where I was reluctant to leave that wonderful world we had created behind, and continued the story by writing about it. First I wrote a 1200 page epic novel entirely on spiral bound notebooks, and then began to transcribe it into WordStar. I got about 600 pages into it and then lost interest. I still have the original 5 1/4 disks that story is on.
I moved to Norfolk Virginia, and Joined the Free Companions Medievalist Society, a form of SCA that used live steel rather than Rattan. There I met a great group of people and soon started gaming with them. Eventually, my gaming habit demanded more and I started my own sessions, with a dedicated group of people and we gamed every saturday night until very late. In doing so, i learned of a sub culture that existed, and was introduced into it. I learned a LOT about things that I had no idea of. That's all I will say about that, other than the book I would later write reflects some of those teachings.
Then I moved south and with no prospects of gaming, tried to create an email system of gaming without success. Once again, not wanting to let this wholly unique world vanish, I started writing, continuing the story from where we left off, using the characters as created. This time I was more high tech, and wrote in AMI-Pro (Which I still think is an outstanding program) I wrote perhaps 50 short stories or so, with the help of some friends who greatly influenced me in the direction I would take the stories.
At about this same time I discovered a program   POV-Ray, which I played around with on a 386 (no math coprocessor) It was a neat program, but I didn't have time to really learn it, and it took forever to do anything on it.
Eventually, my life changed, and I gave up writing about that unique world for a time, but then was prompted by my friends to take up writing again. But I really didn't want to revisit the past and use the same characters from before. They had played their roles, and I felt guilty taking other's creations and using them as my own.
So I moved the setting some years into their future, and then let the children of those characters run with it, and make the world their own.
And did they have a story to tell! A world their parents could never have imagined, characters, places as vivid to me as real life as they told me their tale! With countless mind numbing months to work on it, I spent every free moment trying to transcribe their words, their deeds, their disappointments, their heart and soul into  words so others could understand.
Eventually the story grew so big and cumbersome, so many characters clamoring for attention, that I had to throttle back and stick to a central story line. In the end I had written 800 pages, with perhaps another 800 to go for another book I promised them I would write.
To those few that had read the first draft(s) it was something of a shocker, and when they finished reading the massive 800+ page turning monster, they were ready to do their significant other, but when asked what the story was about, they couldn't really say. It was about this time  I tried to have the book self published, but it was considered too pornographic for even them!
Since I wanted to really tell a good story, and not a pornographic novel, I went back to the drawing board and started to flesh it even further, developing the characters even more. In the end, I'm nearly done writing what will be the final revision, with a more modest 600 pages with the porn a little toned down, and the story so much better than before.
Since writing even a single page is a huge commitment of time, writing was done in seclusion where others could not bother me. All other times, when I was not busy with the mundanities of life, I explored the world of computer art, first dabbling with Bryce, then a copy of Poser that was on an 2nd hand computer. I was never happy with the shadows in Poser, and didn't like the flat look of Bryce. It wasn't until I played with Vue 4 esprit that I knew all of those images I had carried in my head for so long could finally be made real
In the past two years, I haven't really had the time to finish writing the novel, but do have time for art (I can be distracted from art, and get right back into it, but if I lose my train of thought while writing, I have a very difficult, even impossible time getting it back) I have upgraded everything, work strictly on a Macbook Pro, and having a great time first introducing the characters from the book to you, and then some really neat scenes soon!
Oct 2007