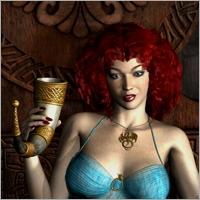 About me and my work....
Words about my life. First. 56 years old (in 2009), married, 3 children… A great part of my life lived out of France. Scientific studies then technical. No relation with drawing, graphics… Except during my spare time. I always drew. Since I was young. The computer enabled me to develop this pleasure. My signature is the first name of my first heroin, Agnès. It is the first name of the heroin of the Gothic novel of Matthew Gregory Lewis, the Monk. But it is also the ewe-lamb (agnelle in French) sacrificed on the altar of creation. Agnelle, almost an anagram of Yanel (my first name).

Then technical words. My colors, my brushes are data processing 3D. I use primarily two softwares: Carrara (Eovia) to model the decorations and the objects; and Poser (CuriousLabs) for the setting of scene and the “catch of sight”. But there is also the photonumerical which enables me to subtilize sides of reality to fold it with my virtuality. To map my 3D objects with real textures, taken in real places. When all is ready; when my virtual actors are on the scene; when the light is regulated and the camera in place; it is time to take the photograph. In 3D we name it “rendering”. It is one intense moment, exhausting of waiting (20, 40 minutes, several hours sometimes). Because nothing guarantees the success. A shifted lighting of a half-degree, a too white or too coloured light and all the dramatic effect of the scene are destroyed. It is then necessary to compute again. Time put to carry out an image is variable. All depends on the decorations to realize, the objects, clothing, the characters. If all already exists, if there is nothing any more but the setting in scene then I count ten hour.
Creative words at the end. It is a sentence, a word, a text which throw me in the creation of a history.
The scenario is built in me slowly. The day, the night. I write the ideas on a small notebook, I draw some sketches with a black pencil for the decoration or the setting in scene. I find a sensual pleasure to mislay, to blur my readers in their intimate dreams, in their secret desires with my pictures that I try to make vibrant with an almost palpable reality. From the pictures of “the Novel of Agnes” (on my free site) to those of SAINT AGNES,  what a long way… ( There is also an excellent interview of me in Taboo Illustrated :-)