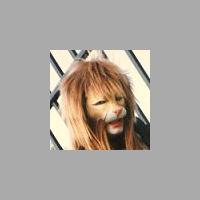 Ah, thanks for the clarification. Yeah, I prefer that one, too. Of course, when DAZ removed that large repository of permanent freebies, the pants "disappeared" as well. Their default texture is purple as was often depicted in the 60s and 70s issues. (Purple is the color opposite of green, and is often used to make the other "pop".) But as the trope is often mocked, I opted to make them a neutral grey for this render. Here's another piece I did with that version, using the even older figure M3P4 (Michael 2 with the body shape and rigging of the Poser 4 Nude Male (teasingly called "the Dork")) paying a bit of homage to the very first Hulk comic cover. ![F3-Hulk-Banner-J-2.jpg](https://forum.cdn.renderosity.com/forum_12356/thread_2952441/message_4400973/file_f2217062e9a397a1dca429e7d70bc6ca.jpg) I ran it through a polarizing filter as an experiment and it looked like Banner was getting hit by gamma rays, a happy accident. Sincerely, Bill

Tempt the Hand of Fate and it'll give you the "finger"!