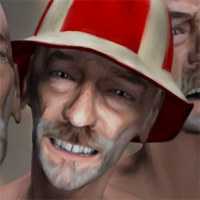 [FVerbaas](https://www.renderosity.com/?uid=763061) posted at 2:10AM Thu, 24 September 2020 - [#4400150](#msg4400150) > What you are asking here presumes that what you see (the outside of the waistband) is positioned such that the inner side of the waistband connects to the skin. Unless in some way the material that fills the waistband is defined, that is not possible. There is no way you can expect a program to dream this up by itself. > > Solution for this has been in the cloth room since the beginning with Poser 5. Shrink the waistband until it connects to the skin and make it constrained (or cheorographed if the garment is a conformer). The point is to make it shrink to fit the skin, Blender does it, so it's possible. What your suggesting(constrained) isn't the same and does not allow for natural movement. It just sits there glued on, but by shrinking it it can now move with the underlying mesh and if the hip moves up, the cloth can slide a bit vertically, like clothes naturally do. If it's it's constrained it sit in the exact same place and bends, rather than sliding to accommodate motion. I generally shrink my models waist(chest, legs, etc., whatever is beneath the fabric) and then scale them back up in the first few frames(generally 3 or 5), and that accomplishes nearly the same thing, but after about 30 frames it loses the effect, because everything has equalized, but by having a continuous shrinking factor applied to the cloth that is constantly interacting with the boundary of the mesh(there's already collision detection happening all the time) it works more naturally, and also looks more natural. Again Blender does this, so it's not even close to being impossible. ...and the inner waist band does in fact connect directly to the skin, it was made in Blender, using their shrinking tool so that it sits exactly at 0.001m off of the skin at 10xs Poser scale in Blender, and is exactly 0.002m thick at 10xs Poser scale in Blender. ...as far as what fills the waist band is concerned, cloth self collision will take care of that, or better yet just give it some internal pressure, Bullet Physics already does that.