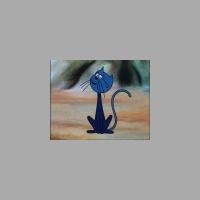 For those interested my avatar picture and name comes from a character in a BBC cartoon called Willo the Wisp voiced by Kenneth Williams from 1981 that I watched when young and for some reason the character stuck in my head.

I’m a forty year old computer junkie. I have worked in various computer related Jobs and have always had an interest in CGI. I have played around with Daz studio for about a year. A few months ago I purchased a copy of Lightwave 11, musty because I had worked with people who used it and played about with it in the past.
Any idea of picking it up quickly as I had Daz studio was soon gone. There seemed and is so much to learn and still is. It’s a whole new language literally. So I decided to set a goal and learn at least enough to be able to import a figure from Daz and do at least a passable attempt at a realistic skin texturing. I now feel at least pleased enough with the results to share some of this work.
I am certainly in at the deep end but learning to tread water.
Please feel free to offer advice or constructive criticism as I know I need the advice
When it comes to 3d graphics I’m on the second step to enlightenment.
The first is
‘I know that I know nothing.'
The second and where I think I am.
‘I know I know practically nothing.’