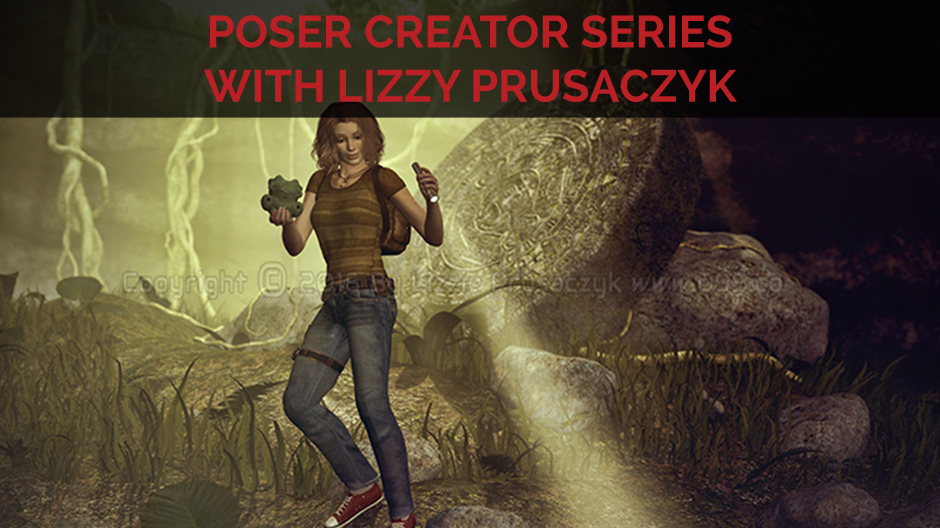 That's why we want to take a closer look at the creators who leverage the power of Poser to create whatever they desire.

When inspiration struck Lizzie Prusaczyk, a.k.a., Dream9Studios, she turned to Poser, the program she was most comfortable with to create her graphic novel.

Her fascination with 3D computer-generated images started when she was a child and has only grown since.

But she hopes the photorealistic 3D illustrations will set her graphic novel apart from those that are traditional produced.

"My novel, as seen in my concept art and promotional artwork, is illustrated in the style of 3D realism with Poser Pro 11 and a touch of Photoshop," Prusaczyk said.

Not that she has anything against traditional art.

"I started out as a traditional 2D artist and was quite good at it (lots of practice!) The only formal training I have is in 2D art," she explained.

But she had to put the pen and brush down in 1998 because of arthritis in her wrist and picked up Poser in 1999.

"3D art saved me and set my muse free as holding a mouse or a stylus is low impact and therefore far less painful. I still sketch out ideas occasionally but I'm primarily 3D now. I still hold onto the best of my 2D traditional works as artifacts of a bygone era," she said.

Prusaczyk opened Dream 9 Studios, her store on Renderosity and her website, ds9.co, back in 2006.

On her website, she sells fine art and original content for other 3D artists. The website will also offer digital distribution of the Shelby Bly graphic novel.

She has finished the novel's story and finalized her main character concepts. All that remains are the illustrations. She is currently working on creating the locations and backgrounds for her final renders for the novel.

"I even finally have the ever important Mapstone props thanks to a fellow Renderosity member, PerpetualRevision, who created them from a sketch of mine," Prusaczyk said. "I hope to soon start on storyboards and then I'll be ready to create the actual illustrations." About 'The Adventures of Shelby Bly'

Prusaczyk's graphic novel follows the adventures of Shelby Bly as the 20-something college student works to free her father, Dr. Robert Bly, from the clutches of a group of mercenaries bent on getting their hands on Vril.

"Refusing to sit by and do nothing after his abduction, Shelby decides to find the Vril source herself and trade it for her father's safe return. The truth is, although Shelby is determined, she has no idea what she's doing out in the field," Prusaczyk said.

With the help of her friends, Shelby races against time to keep Vril from falling into the wrong hands and save her father in the process.

If the story is vaguely reminiscent of Indian Jones meets Tomb Raider, that isn't by accident.

"I love Indiana Jones movies and pulp novels plus the Tomb Raider games. Those were of course heavy influences for me. 'Romancing the Stone' is another heavy influence. I love that movie!" she said.

Prusaczyk even studied archaeology in college and got her associates degree in history.

Her fascination with the subject partly inspired the graphic novel. Once she had a character, she needed a reason for adventuring.

So, Prusaczyk spent weeks researching ancient legends and mythical artifacts, going down rabbit holes of lost civilizations and secret societies before coming across a series of sci-fi novels called "The Coming Race" by Edward Bulwer-Lytton and written in 1871.

"It's mainly about a race of people who live in a hallow Earth and use a substance called 'Vril' to give themselves superpowers," Prusaczyk explained.

"What intrigued me about it most is that the novel was so unusual for the time period that many took it as fact instead of fiction," she said. "This led to stories of a secret society called the Vril Society, which had connections to the Nazi occult."

The parallels to Indiana Jones made her start thinking about Vril and led her to imagine a lost civilization called Vril-ya.

But she wanted to make the story about more than just a search for treasure.

"It's also a story about family, friendship, and the dangers of keeping secrets," Prusaczyk said.