7 - Coffee Shop - A handshake instead of... by MollyFootman 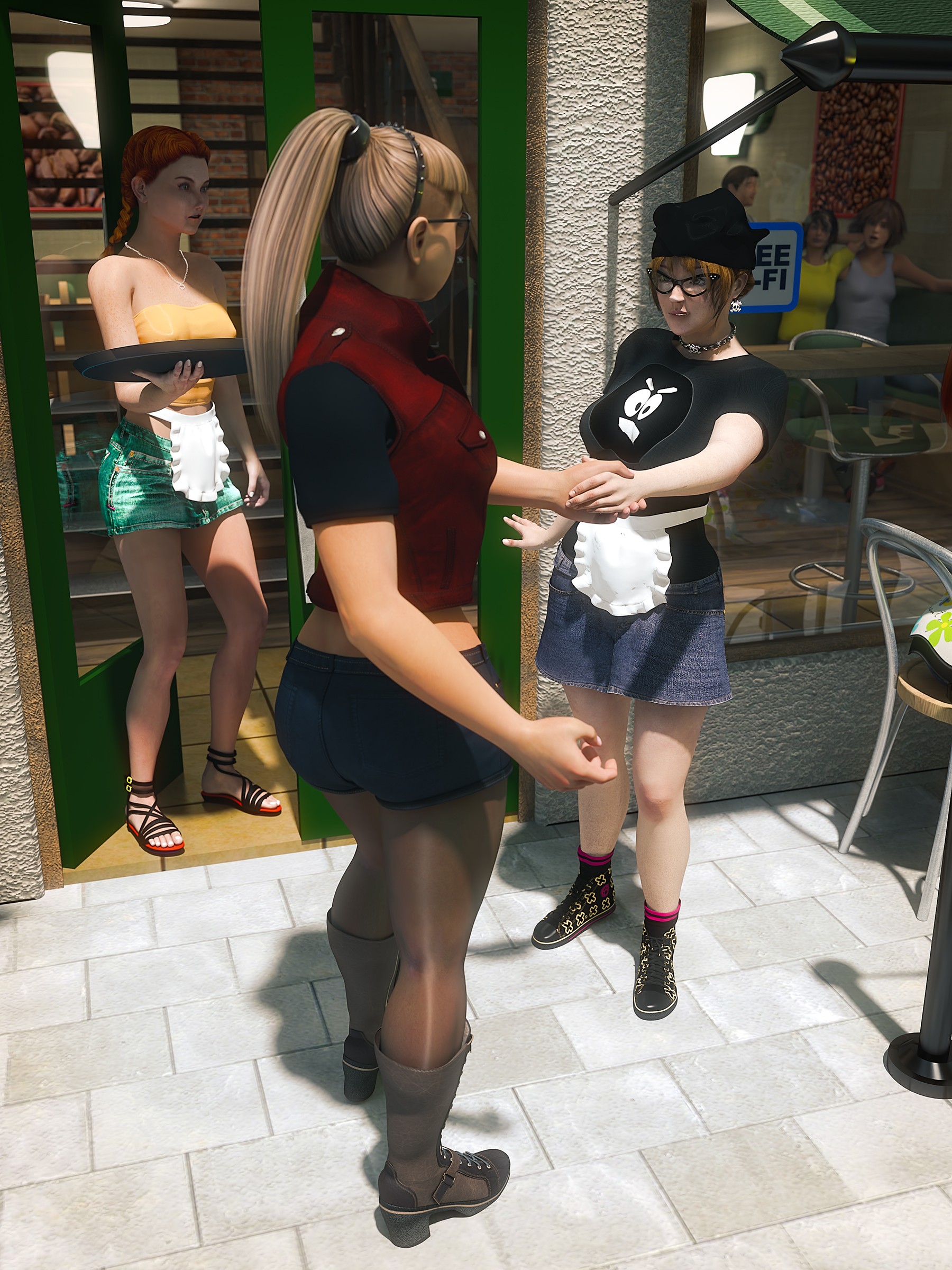 Gregor and Vladlena finished their meal and moved to depart, thanking the two waitresses who were now to be Lena's roommates. "Must hurry as would make bad first impression to be late for appointment with Professor Van Humbeek," Gregor said. The waitresses followed the two Russians to the front door and Pixie impulsively stuck out her hand to Lena. Briefly puzzled by the American gesture, Lena reluctantly took Pixie's hand in her own. "It's been great! A real honor! And fun! And..." Pixie's perky voice trailed off as she experienced a surprisingly erotic shock at the warm, firm grip of the Russian. "And, er, fun!" she repeated lamely. Gently squeezing the offered hand, Lena replied, "Da. At first am not sure about you, Miss Pixie. Now am thinking you will be good room mate." She gently squeezed Pixie's hand again. "Oh. Yeah. It'll be stellar! I'll bring pizza for dinner! I know where the best pie in River Heights is to be had and... and..." Pixie trailed off again as her world seemed to collapse into Lena's warm grasp. "And maybe to release hand now?" Lena prompted. Oh yeah! See you later!" Pixie felt a blush spreading across her face as she released her nervous grip on the Russian's hand. "Oh Brother," Brooke thought as she observed this exchange. "The Pix really has it bad this time." Molly's art notes: Set up and rendered in Poser 12.0.757 using the Superfly Cycles 2 rendering engine and then tweaked a bit in Photoshop. Patricia "Pixie" Dust is based on the marvelous Project Evolution One by erogenesisCGI. Vladlena Bubnoff is a character based on the much neglected Bella 1.2 mesh by Ali (get it at his website, Mankahoo). Brooke Potts is based on Dawn and is also modified with material from Tempesta3d. The setting is by Blue Tree Studio. The title of the picture references an old Listerine commercial from my youth: "A handshake instead of a kiss?!?" XD

Brooke for Dawn SE
By RPublishing

A most humorous and somewhat romantic exchange(?) in this scene! Very well constructed and realized! You really have shown your fantastic talents here, Molly! Bravo and many fine kudos!!!

Thank you, Rad. This story is becoming kind of special to me so I'm very glad you are enjoying it and the pictures I am using to illustrate it. =)

Aw, how cute to see Pixie so flustered by her crush! Love her smitten expression and the little flare she's doing with her right hand, which conveys how giddy and unbalanced she's feeling! Brooke does look a little worried about her friend, maybe not wanting her to get her heart broken?

I somehow hadn't fully noticed their little frilly waitress aprons until this shot, and they are hilarious! Basically useless for actual protection, but cute!

I see from the reflection that Roxie is still engaged in whatever deep conversation she was in when Lena and her brother first arrived. Is that Pauline inside the shop? She looks vaguely shocked by what she's seeing through the window, so maybe there's some jealousy happening there?!

I'm glad you are enjoying the picture and noticing so many of the tiny details. I have a special fondness for the kind of geek girl that Pix is and Brooke is used to her friend showing enthusiasm for things that borders on bad judgement. I imagine that Brooke and Pix go way back, probably to Middle school so Brooke has had plenty of time to see Pix get herself into one fix or another.

Heh. Yeah, the aprons were meant to be symbolic and cute but they won't be much help with a coffee spill. XD

The reflection in the window that I hoped would be notable was the man in black who is still watching. He'll be in the next picture.

Yes, that's Pauline sitting with Jesse and they're complaining to David about the service as Pauline can see that both of the waitresses are socializing at the door. =) She is kind of a mean girl in my mind that's jealous of Brooke's position as graduate assistant to Professor Van Humbeek and dislikes the Pix simply because the Pix is happily a friend of Brooke. I may explore that a bit in the future but I am mostly focused on the relationship between Pix and Lena. If you want a bit of a teaser, Grace the ghost will be showing up in the not to distant future if I don't lose my focus as I so often do. XD

great character interactions, lighting is fabulous and love the view outside looking in the shop.

Thank you so much, Steve. This story is most prominent in my mind among my various projects and ideas and knowing that you are enjoying it is fuel for the creative engine! =)

This is really sweet. Their interaction looks and sounds realistic. I always love the details in your scenes. The lighting in this one is excellent!

Thank you so much for your very kind comment! =)

This story has become special to me and I am very glad that you are enjoying it also!

Thank you, Rod. This story is currently my favorite of those I've been adding to so I'm really pleased that you enjoyed it enough to leave me a little comment! =)

My pleasure, Molly. I seriously need to get my butt busy on MY story - it's been far too long. I don't think I've ever gone this long between pages. Just been hit hard with this &^%$# depression and lots of other stuff as well. I think I'm making progress little by little...

Life often intervenes and diminishes time for art. Take care of yourself and life first, my dear!

You made a lot of fantastic looking images!

Thank you, Ute. This is my favorite story right now. Love the expression on Pixie's face and really like how you captured the feeling of trying to talk to someone you crushing on.

God knows I've been in Pixie's situation more than once in my life so far. XD I'm glad you can see how smitten she is.

Kids in the Gym

37 - Arrival at the Darkstar Manor

36 - The morning after Lilja's abduction