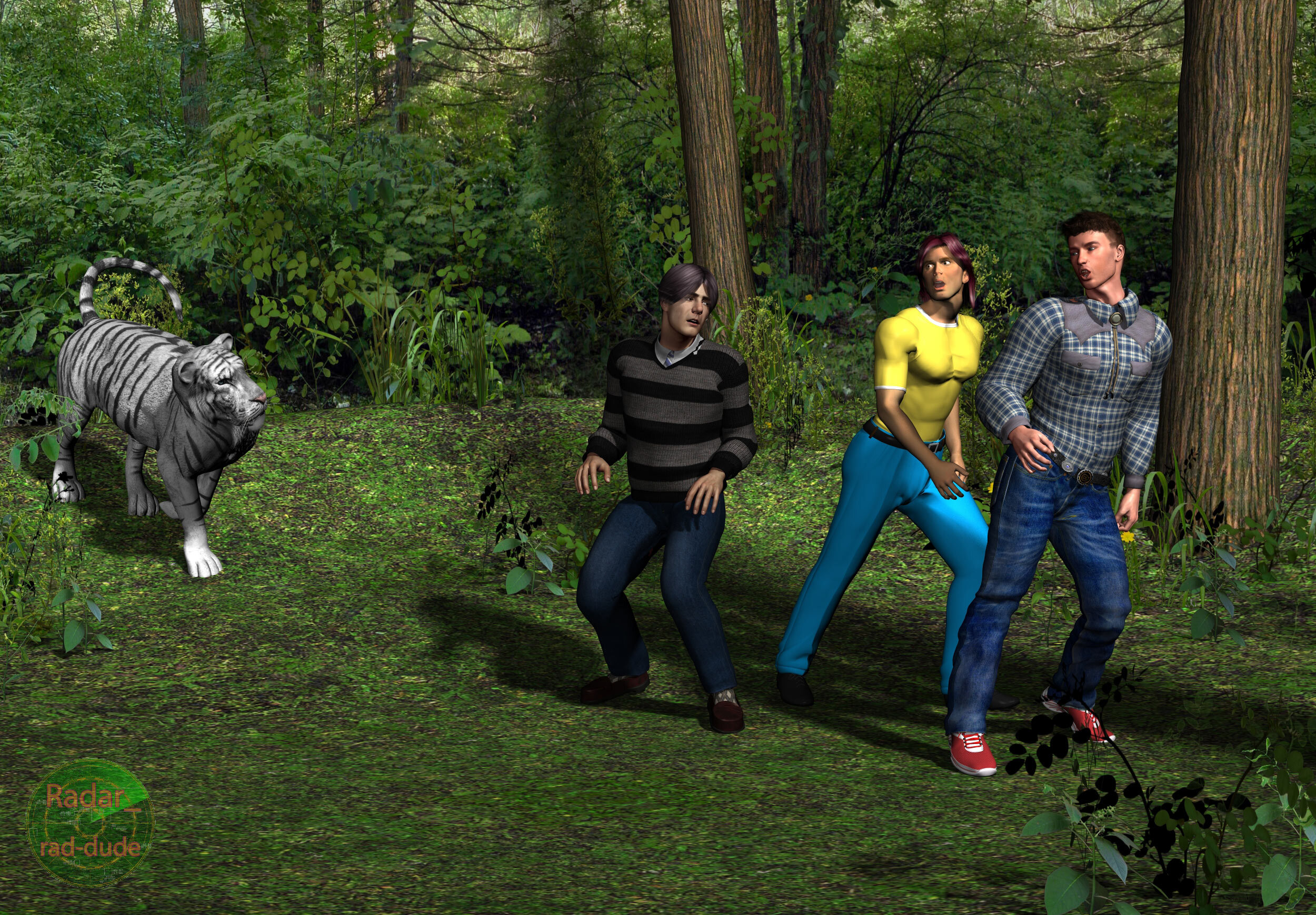 M4, M2 and M3 characters, along with the DAZ millennium big cat. Thank you for taking a peek! Your support is greatly appreciated!

Wonder which of the three is the slowest?

This is a no contest situation you have put these three in Bill...the tiger looks hungry and is not going to wait for the V2, V3 and V4 girls to run through the forest, right behind these three gentlemen. My take on this is...after much consideration M4 and M3 have decided to sacrifice M2 and offer him to the tiger as a gift, if the tiger would be so kind to spare their life's.

If M2 decides that this arrangement is not to his liking, them M3 and M4 are just going to make a run for it into the forest, as they both know that Daz3d has given each version upgrade a major boost in speed and they should be able to out run M2 before the tiger catches up to him.

In an alternate reality the tiger turns out to be a pussy cat and a vegetarian at that...as he walks up to them and purrs prior to licking their faces. I really like these what if scenarios you post now and then...thank's for putting up with my comments!

Excellent work once again my friend! :-)

LOL! You did it once again, Johnny! Guest my true idea for the tiger. It is, of course, the last one! Or, in the alternative, perhaps he has already eaten the V2, V3 and V4 girls and is just content to send a little sliver of fear up the spines of the male version! Thanks so much for commenting, my friend! I always love your take on things!

Amazing scene you created! I think the tiger is hypnotized by the stripped sweater! Great work!

Oh, dear, this could be trouble. This is way more dangerous than the run-in I had with a bobcat in my backyard. (bobcat couldn't have cared less that I was there. ha!) Good work with those 3 Michaels, the poses are really good.

All we can do is hope there's some guy named Jack just behind those bushes.... LOL A fun (probably not for these guys) image here, Bill! The fun just never stops! I do believe this is the year of the Tiger...

Ha ha ha! Rod! You nailed it on one too! I do believe you are right about this being the 'year of the tiger!' LOL! Thanks very much for commenting! Love you guys take on things, as with JohnnyM and his comments! I greatly appreciate everyone's comments!

Miau ... why stay calm ,,, i think the little cat just wants to play

OK ! but would you stay calm if you were there ?

Hm, this kitty has a pretty huge scaling Bill! Please use the proper scale, so things go back to normal and safe.
A cheap scaling laser can easily achieve a 2% scaling with ease on such a large kitty. Otherwise the kitty will just get too fat and that's not very healthy for the kitty.
Impressive composition with great atmosphere and lighting, excellent render, Bill!

Oh, I hope they don't intend on running; that would be certain death; the tiger will see you as prey. The defense for a tiger attack is to look as big as possible, wave your arms, make noise, and if possible, get on someone's shoulders to look even bigger, and slowly back away. And never look into a tiger’s eyes, they see that as a challenge to fight. Also, steel yourself for the tiger's first roar. They roar in a very specific low frequency that causes momentary paralysis in mammals, human included. There is another defense, but you have to be quick; climb a tree. Full-grown tigers are 80% muscle mass and very heavy. They can climb a tree, but typically adult tigers are way too lazy and heavy to bother with climbing. Lions, however, weigh less and frequently climb trees. And never play dead, that only works for brown bears. Usually, a tiger won’t attack an adult human, they’re afraid of us. If they approach, it’s probably just because they’re curious. (I’ve spent a considerable amount of time studying tigers, so I could include them in my stories, though my tigers are more fantasy than fact. Tigers are probably the most beautiful creatures on the planet.)

Wow, Wolfenshire! That is a lot of very interesting information! I didn't know about most of it! Very interesting to know! And thanks so very much for commenting! I greatly appreciate you doing so!

Hope they have a big container of Temptations cat treats :)

As they say in Germany "the dogs (tigers) bite the last one" Very nice scene, great idea, excellent done.

Of course, you have to be calm, but personally I would prefer to be somewhere else! Superbly done image!

The posing is so good, I don't think I'd be calm :D

What a predicament Bill and so many possibilities! Excellent staging. I admire this very much indeed!

Nice scene! "I don't have to be the fastest! I just need to be faster than you!