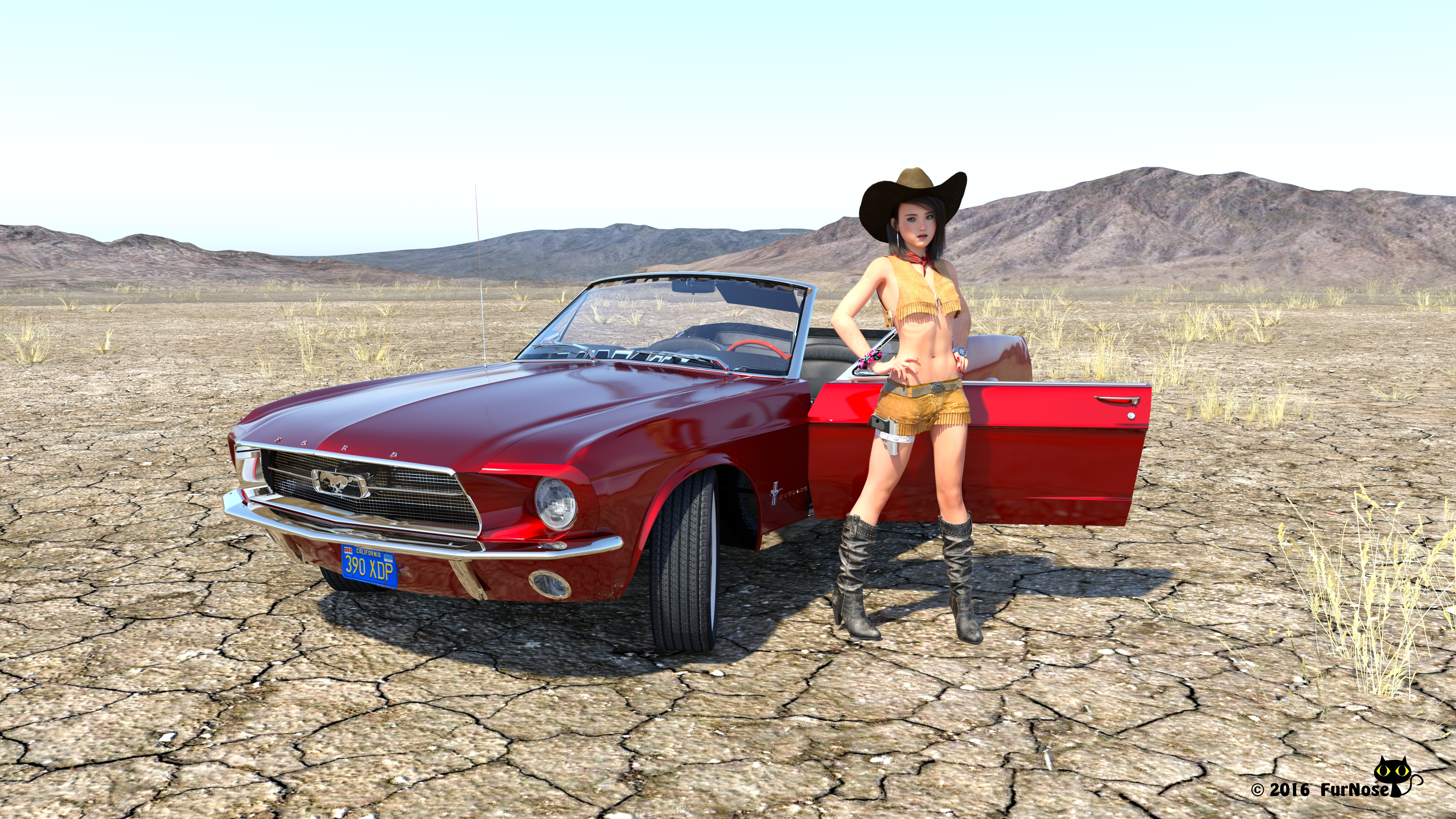 "...Pah! You call me a city slicker? Well then, tell me what attributes qualifies to be called a Cowgirl in your eyes? - wearing a hat? - wearing leather clothes? - wearing cowboy boots? - wearing a bandana? - having a gun? - riding through lonely deserted fields with your Mustang? OK, now which ones of your stereotype descriptions do not apply to me, huh...?" Well I can't argue with her... she's totally right and I wish, I had a Mustang like she has!!! I had to do another Image with 3DClassic's phantastic Ford Mustang 1967 (it's very accurate and lovingly detailed, as are all his car models). I love that car, and though I'm not referring at my self as a great car fanatics, this car would be a dream to have in real anyway. Those where the times, when cars had a distinguishable look, when they had character and the design had beauty in mind, not just pure streamlined economics, which makes the cars look all the same, no matter what make they are. Now since the car is that gorgeous, I needed a fitting driver for it. So I dug in my runtime and found Mia - another absolute cutie Angel from Cherubit. While digging i found the good old Western set for Vicky3 (or the Maya doll) from BatLab and I thought back to the times, when these figures where all the rage. Stiff like if they had a broomstick in the back and the limbs, but they where the pinnacle of Poser figures then. I don't even know if BatLab still exists, but I'm sure he would have made some cool and sexy clothes for G8F, would he still be in the modelling business. So I looked at it and thought by my self:"Why don't you use the knowledge you gained in all those years and make it fit G8F?". So I loaded it up. fired up Hexagon and tweaked it th make it fit G8F. Then I let the transfer tool of DAZ-Studio doing the rigging and and the weight mapping, before any further refinements where undertaken. How ever those fringes drove me almost crazy, since they tend to disconnect from the skirt and float around. Even the trial to correct the weight maps yielded only mediocre results. Then I tried to dForce it, which resulted in a rather unpleasant draping experience. So I left it as a conforming piece of clothes. Maybe I can do a completely new version once in a while specifically designed for dForce, because those cheeky fringes would look pretty sweet, if they would respond to gravity, wouldn't they? Credits (not mentioned below) Mia for Genesis 3 and 8 Female by Cherubit @DAZ Lainey Hair for Genesis 3 Female(s) and Genesis 8 Female(s) by Outoftouch @DAZ Spy Pistol and Garter for Genesis 8 Female by Esid & FenixPhoenix @DAZ Dry Mud Desert by Aako @Daz (Just to correct: below I refereed to BatLabs Western set R2, but I used here the original old R1 Set) As always this is a pure IRAY Render without postwork (except for the Logo in the lower right corner) Thank you for dropping by and thank you for all comments on my previous pictures! You are welcome to post any critics (positive or negative) if you like to. Cheers

FORD MUSTANG 1967 for POSER
By 3DClassics

Cowboy for Genesis 3 Female(s)
By RainbowLight

And not a scrap of dust on that bodywork!

That would be the next task then - simulating all the dust

Driving a "real" Mustang is one of my dream. But finding such a car in France in good condition at a good price is really difficult. Most of them have not been used... in the desert, and when they are not very expensive they are very rusty! So this cow-girl is right to drive it on a dry ground!

They both look really great here, my friend! And heart-rending as well...

Anyway, you did a great job on this scene, my friend!

She's got a nice pony there.

All your wonderful devotion and work really paid off here.

The beautiful country bumpkin looks like she has won the lottery.

She should not drive this superb and expensive car off the beaten tracks...what if she was stuck there ?

She looks like a real cow girl to me!