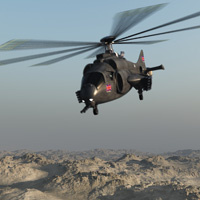 The Rhino is concept helicopter which is used in a variety of roles for both the Military and Civilians. It is a sturdy helicopter which can carry 8 people. The military version has an advanced radar system and boasts a front and rear dual 30mm canon. It has 2 interchangeable rocket pods which can house 10 dumb fire rockets in each pod. Main roles of the Rhino are recon, light air support, crew transport, security and offshore operations.The model will be available in Vue, 3ds and object formats.