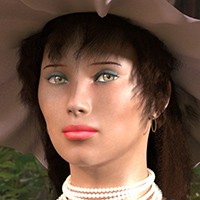 I confess: I'm obsessed with hair, or at least Poser hair.

The other day, I put in a P12 feature request for something like Blender's particle-based hair system. I actually like the way the strand-based hair from Poser's Hair Room looks, as such, which is a big reason why I keep going back to it even though I have literally dozens of transmapped hair products. Blender's particle hair construction is similar (I think) but the approach is much more robust.

Poser's problem of course is that the Hair Room doesn't even have the two most basic styling tools required to style hair properly — comb/brush, or scissors. (Ideally, both would work across multiple groups, but now I'm really dreaming....)

I suspect that the way the software is written even those basic styling tools are pretty much an impossibility, or presumably, they would have been included long ago.

That styling issue is why I find the Hair Room so aggravating, and why I keep trying to reuse other people's very outdated hair for old figures and see how far I can push them. Long, long ago, Adorana thankfully somehow managed to do Hair Room styles (for V3) where the hair itself at least looked natural without being extraordinarily messy. (Any time I've got far toward getting a style that is largely the "shape" I want, by then there's usually quite a mess of hair everywhere, not to mention uneditable "flyaways" floating around.)

Unfortunately, many of Adorana's styles themselves were a bit ... odd, or at least unusual.

The most notable exception is Shena hair, so I keep coming back to that and seeing what I can do with it, trying to push the realism as far as I can.

In this particular case, I've done a great deal of work with it — not just reducing the root and tip widths (and correspondingly upping the hair density), but also lengthening the hair and giving it a bit of kink (Shena hair by default looks just a little bit too perfect to my eye). The kink made the bangs look out of place, so I had to do a bit further work in terms of moving those strands downwards at the roots. That made a bit of scalp show, so I then also made a second copy of the hair. On the copy, I got rid of most of the groups, just retaining the second set of bangs and the groups near the front at the top. I dialled back the density on these but set the root thicknesses a bit higher, and then translated the groups around to fill in the exposed scalp.

And of course, I swapped out the default materials.

It's still recognizable as Shena hair, I think, but more natural, I think. Still not 100% happy with the bangs, and second copy probably made the front top hair just a bit too 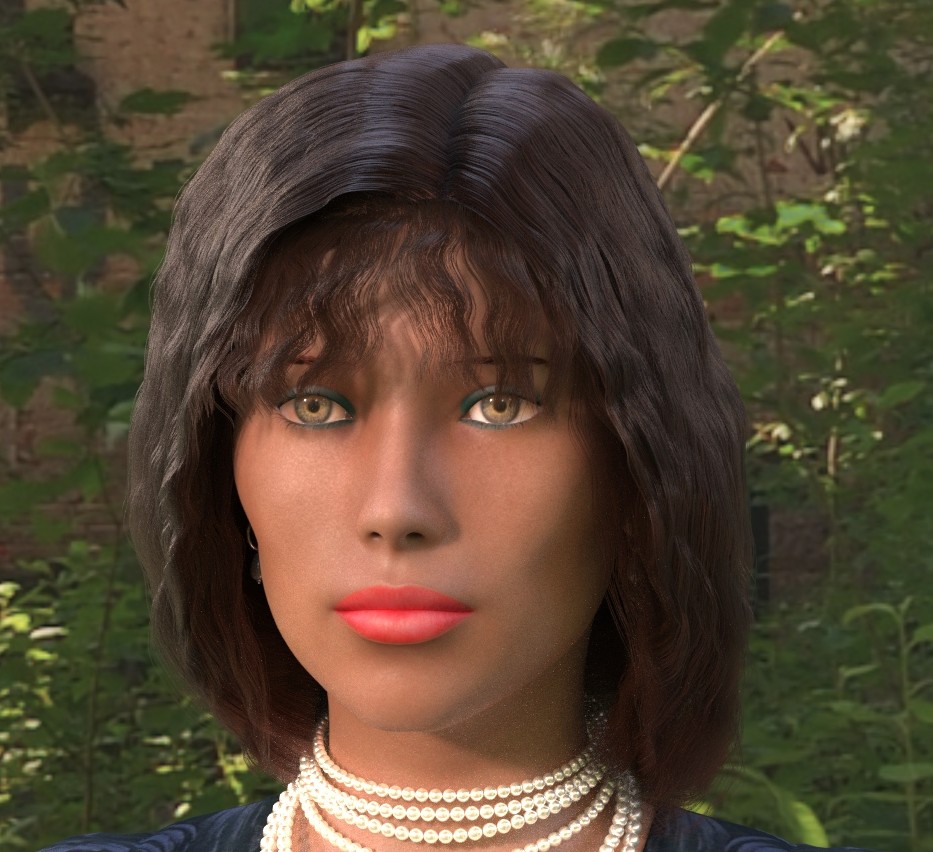 thick, but I think it looks pretty good. Note though that this is an in-progress render; it's already been going for a few hours, and is still showing the Path Tracing Sample as 142/576.

I also have a pretty nice blonde render from before I did a lot of the more ambitious alterations. On that version, you can see why I ended up having to do further work with the bangs. I'll probably post that too.

Oops. The image ended up in the middle of the text. Sorry about that.... 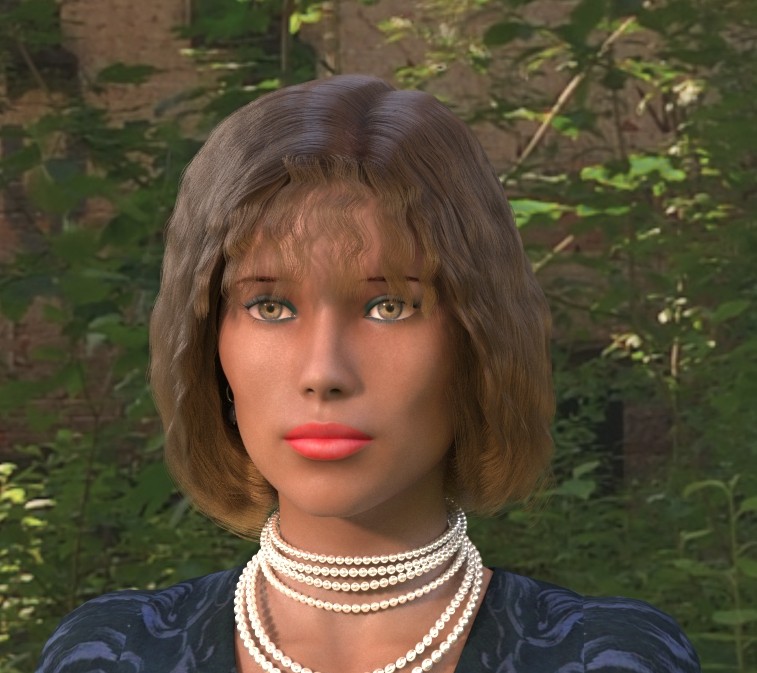 Here's the blonde version I mentioned. There are a few modifications already here, but not nearly what I ended up with.

As you can see, the bangs were kind of floating once I dialled in the kinks. I like the way the material looks, though.

Honestly, I may have been better off just starting over from scratch with the bangs, as I'm not really satisfied with them in any version. I'll probably still do that.

These look good. I like the look of strand-based hair too. With a good style, it can look so much better than most transmapped. I've been thinking about getting back into the hair room to try to make some new hair, but I have too many projects already and not enough time to be in poser as it is. Maybe soon things will settle enough for me to try. 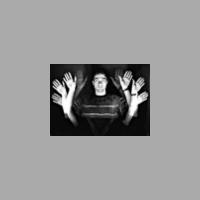 This makes me wonder how hard it would be to style hair in Blender and somehow convert it to Poser hair. I remember doing kind of the opposite at one point, which was exporting Poser hair as a mesh to be used in Lux, so the data format can't be too complicated.

It also plays nicely with OctaneRender, my favorite way to visualize Poser scenes, since it has an interactive mode. In fact, trans-map hair is practically unusable with Octane, unless you want to go insane with material nodes. I wish there were more strand hair products/freebies available. 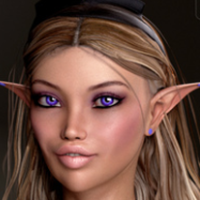 Woah... Great result! I've never been able to do something with Poser's Hair Room

Heh. Thought I'd see how difficult Blender's particle tools are. Keep in mind that I don't know my way around Blender AT ALL (as you can tell by the fact I don't even have the eyes right) -- just struggled my way through the first few parts of BlenderGuru's donut tutorial last night to get my feet wet. This style is really bad, but given it's the first time I've played with it, I can definitely see the potential. The tools definitely make more sense than the ones in the Hair Room. (Also rendered really fast — 4:04. No noise in the hair after a couple minutes. Granted there's nothing in the scene, but all there is the Poser scene above is an HDRI. I certainly couldn't get that quality of hair render out of P11 that fast, although I know the Cycles version of P12 is a big leap faster. 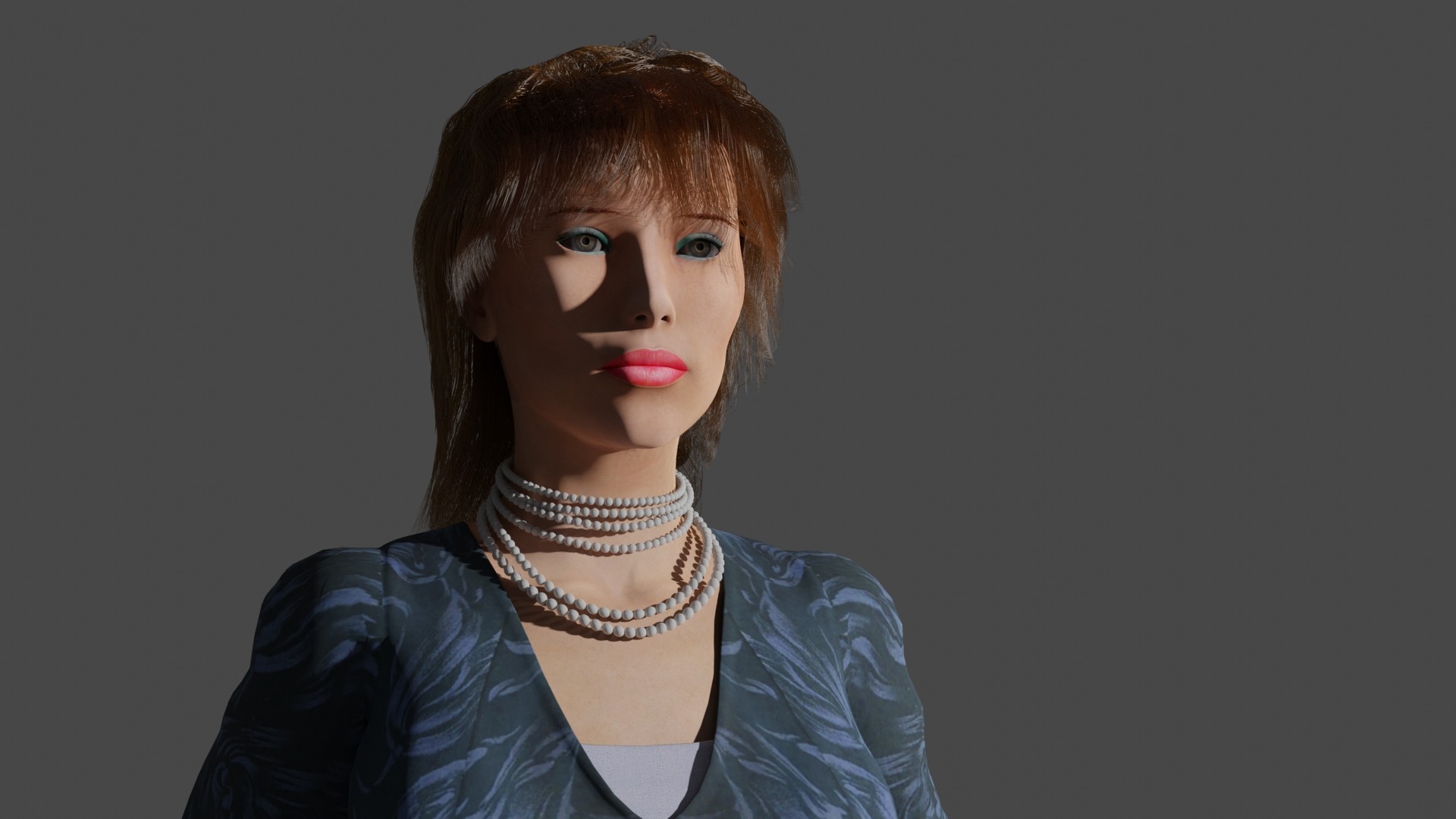 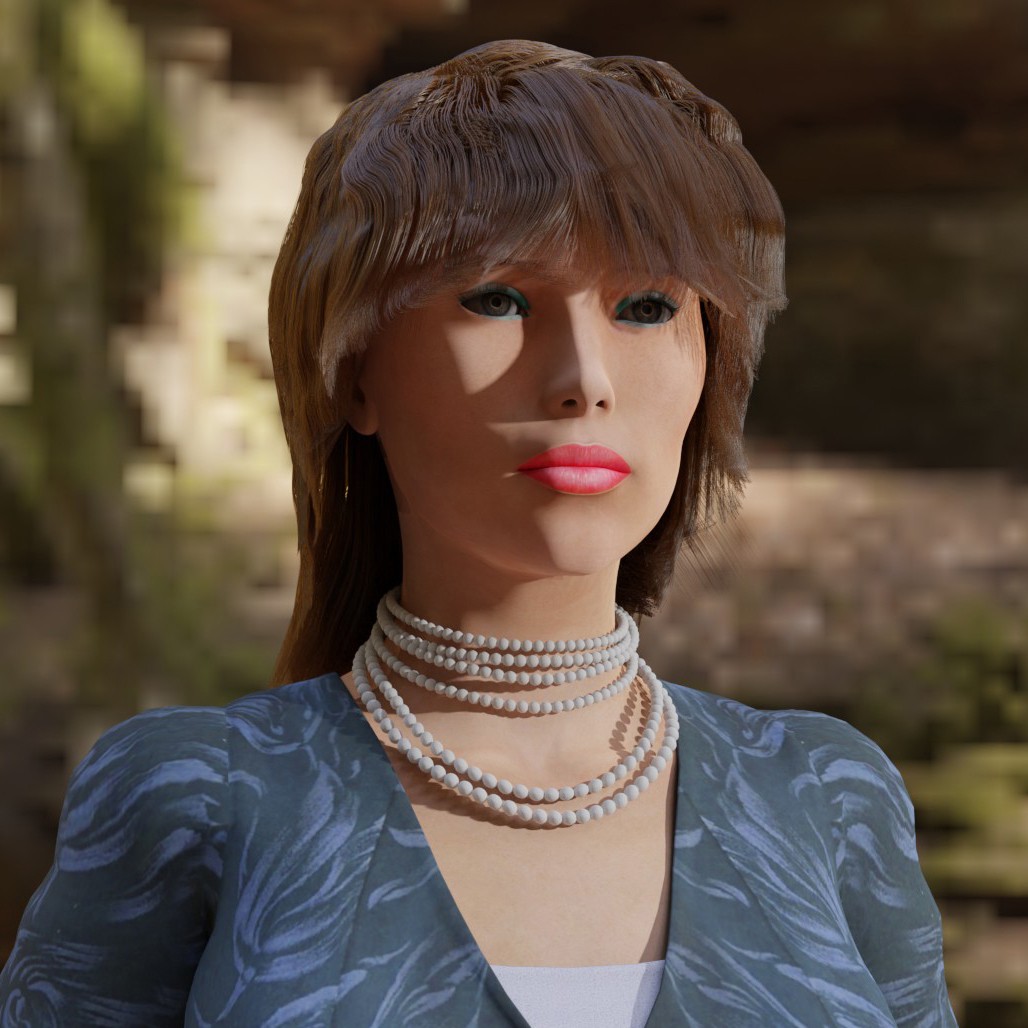 Blender hair can be converted to mesh to be used as transmapped hair. I haven't figured out if it can be exported in a way to be used in the hair room. Conversely, strand hair can be exported and used in blender. But you need to have the show population checked. Poser often crashes when exporting it. You can then edit it. There's more about it here https://www.renderosity.com/forums/threads/2958451/poser-strand-hair-in-blender for if you want to render in blender.

Yeah, I think I knew you could convert Blender hair to mesh and use it in Poser. But for me, that defeats the purpose, because then you lose the look of real strand-based hair.

Since it's Poser's styling tools that are such a problem, I don't think I'd personally be all that interested in exporting from the hair room to Blender.

Exporting from Blender to Poser's Hair Room, on the other hand ... I wish that could be done. That's the one transference I could see myself using. But I doubt the capability exists.