Subject: Help needed, how to link one morph to the other?

I have used Poser for  a long time now but never needed this for my own work. I made a morph for lafemme, changed it quite a bit. Now when I close the eyes, they don't close so well. So I fixed this on Zbrush. Now how do I link my closed eye morph to the eye close morph from lafemme and only when my morphed character is dialed in? I need baby steps, not too technical in Poser lol

Your request is something I do quite a bit with Poser; that is linking morphs (pre and post transform) together via the dependency editor. Usually in versions that will carry over to PMD injection poses.

Also know that demonstrating such a process probably requires more work than actually doing it.

There's a few questions that should be asked by anyone attempting to help you with this.

Do you need or plan on having a version for redistribution?

Have you split the fix difference morph into left and right sides via the split morph command? If not, the fix will only work if slaved to the basic Eyes Blink dial, no Eyes Blink Left or Right functionality of good result.

Realize the fact that La Femme's Eyes Blink functionality is actually rotations of upper and lower eyelid body parts on both the right and left sides, controlled by a master in the head. I've found that creating masters for controllers such as this, that is if you plan to copy it to injection pose, work most reliably for that purpose when created in the body. It's just one of those things. Also note that your fix will be, once all connected to a new master with the Eyes Blink dial, or more ideally to both the Eyes Blink Left/Eyes Blink Right as a split morph, a Joint Controlled Morph or Morphs... Phew. In any case you'll want your new masters to link up with the original blink dials in such a way that you'll have new blink dials so as to not slave your fix to the original blink dials... doing so will cause your original Blink dials to always dial in the fix regardless of the the face morph you have or do not have dialed in.

Are you still with me?

Now you say you only want this/these JCMs to only be active when your specific face morph is dialed in. Creating new master Blink dials, as I just discussed, will make this feasible. Only use those new blink dials, with the fixes built in, with the custom face they were designed for and there you have it.

There is however a way to avoid ALL of these hoops and complex dial relations. Have you tried baking your lid fix into the new face morph, exporting that as a morph target, reapplying as a FBM and seeing how it looks? If it looks ok the fix will be built into the default new face and you needn't worry about all those extra dials. You can tell how it will look by dialing in the custom face morph to 1 and dialing in the lid fix in to 1 (without closing the lids) and checking. If it looks reasonable, simply Figure Menu: Zero Rotations, make sure the face morph and the blink fix are the only morphs not zero, File: Export: Wavefront OBJ: Select all the actors that are effected by the morph (you can check exactly what those actors are by looking in the morphs keyed dependencies list via edit dependencies, probably in the Body as I'm assuming your face morph and fix were generated as FBM), uncheck everything except Include Existing Groups In Polygon Groups, name your Morph, Save. Reload on the zeroed figure via Figure Menu: Load Full Body Morph. The dial will be in the body (you can of course create a new empty master in the head to drive this if you wish). Be careful to always use new unique names for your morphs, it's a good habit when going through morph iterations towards a bake or parts to have a final name in mind that's unique and well... final. Multiple morphs with the same names will wreak havok, particularly internal names. That is unless you're working with conformers, then it would be beneficial for crosstalk/include morphs functionality.

There's a bunch of other stuff of course but this is the preamble as it were...

Taking the thread title at total face value, answer via not baking

Go to face morph dial and type 1 in the numeric field, do not hit enter, click on the palette and the value will be set. Do not hit enter.

Go to Eye Blink Fix dial and type 1 in the numeric field, do not hit enter, click on the palette and the value will be set.

Go to face morph dial and type 0 in the numeric field, do not hit enter, click on the palette and the value will be set.

Go to Eye Blink Fix dial and type 0 in the numeric field, do not hit enter, click on the palette and the value will be set.

Thabks for the replay, yes IT is die distribution. I Will Read later your explantation. Will let you know :)

The best way to approach this problem is as you run in to difficulties please post an image with an explanation or question (it doesn't need to be a fancy render, a preview image will suffice) and we will solve the problems/ questions step by step as they arise.

Thank you for your explaination. She can blink now how she is supposed to blink lol 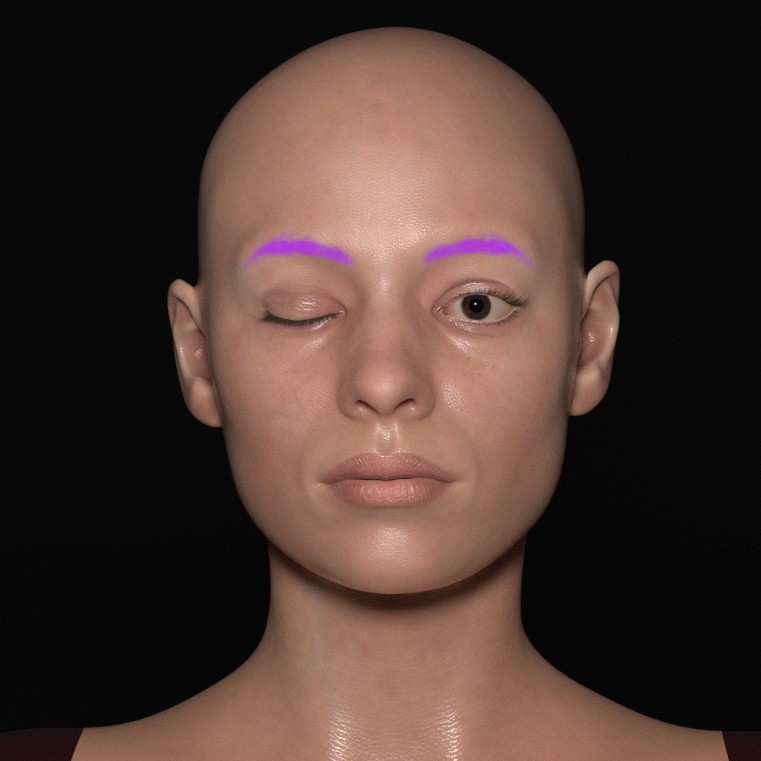