Subject: What the heck happened to Apollo Maximus?? 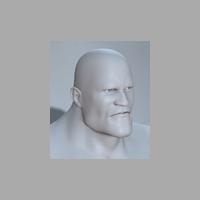 Hi Boni. Problem I have is like that scene at the end of Raiders of the Lost Ark - there's a cardboard box in a room, surrounded by other boxes all the same size & shape, in which there's a storage drive with all my old Apollo files. It was a chaotic move to a new house which we're in the middle of renovating.

That said I'd still be up for supporting Apollo if the demand is there, especially with morphs. I'd probably prefer to do custom morph-brush head sculpts these days, but so long out of the software I'd need help getting those into a pose-ready file (I used to do PMDs but my documentation for all that is long gone).

I'll keep digging to see if I can find any of my old stuff in the cloud. I did about 4 or 5 freebies - mostly ADS morph pose sets but also some miscellaneous PMD morph/character sets. Some were better than others. There was a wrinkle displacement map in one (still have that in a texture bin on this PC) that I used for my older characters. I think the werewolf and the alien were put up too. Frankly if they've become unavailable due to hosting changes etc and anyone just has these sitting on their system I'm more than happy for them to be shared (probably need them myself!).

Last contact I had with Anton was on FB some years ago - he'd definitely 'moved on' from 3d at that point but who knows eh.